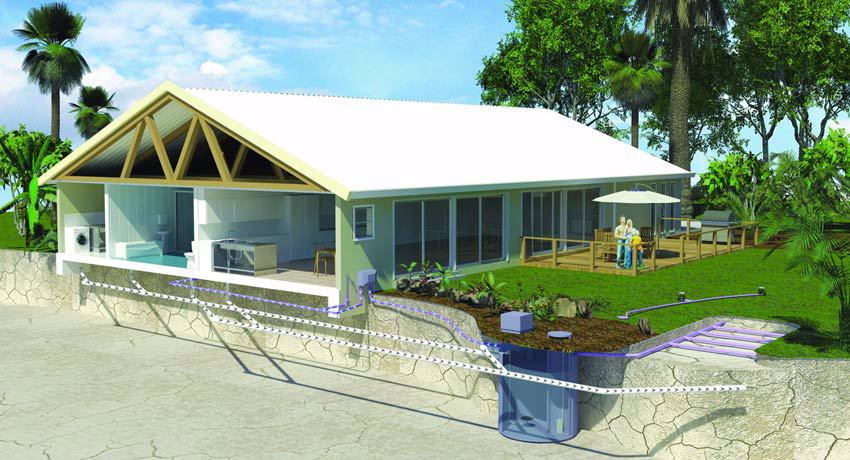 There are two basic types of sewerage treatment processes, which are the aerobic process and the anaerobic process. Aerobic means with air or oxygen and Anaerobic (septic) means without air or oxygen. Aerobic bacteria are a higher life form and when digesting waste are utilising dissolved oxygen or air in the waste water, where as anaerobic bacteria digest the waste through acid fermentation.

Wastewater Treatment plants that use the aerobic processes are referred to as the Modern Day Normal Treatment Plant and most modern treatment plants owned by councils and governments use this type of technology.

These treatment plants treat the sewage with digestion of organic matter or sewage using an ‘Aerobic Activated Sludge’ process, which takes place in an oxygen enriched environment or wastewater treatment plant tank. The treatment of the waste happens within a few short hours as compared to a septic process using anaerobic digestion, which can be in the order of 70 to 90 days, depending on temperature.

Aerobic digestion has two main phases within the treatment cycle:

An activated sludge biomass that has been established for a period greater than 5 days develops sufficient Aerobic bacteria to digest ammonia and other organic nitrogen to nitrates. During the off periods of cycled aeration where the dissolved oxygen is depleted an anoxic environment becomes part of the process. This causes the aerobic bacteria to respirate on nitrates during this period, which converts it to free nitrogen.

Activated sludge offers several important operating parameters which can be tuned to a particular application and as the digestion and oxidation of the waste is more efficient there is little or no desludging required except under extreme heavy load conditions. Oxidation processes convert all organic matter to simple carbon compounds, gasses, and water.

Ozzi Kleen uses the activated sludge process because the naturally occurring aerobic bacteria are more aggressive and driven with the energy of dissolved oxygen in an aerobic chamber, offer a far more effective and efficient treatment process, where rapid digestion of the waste takes place in a relatively smaller vessel.

The Ozzi Kleen Treatment Plant is designed to absorb shock loads, i.e.; automatic washing machine during heavy wash days and above normal E.P. loading for short periods. All this is due to the cyclic process, which absorbs the increase in flow by allowing the filling of the main aeration tank and operating at a high level. It is not until the next decanting cycle that this flow is passed on, and a fixed weir to ensure sufficient contact time with the disinfecting agent controls this flow.

Treatment plants that use septic digestion as one of the processes and aeration of the septic water as another process are frequently referred to as modified septic systems.

In this type of treatment system or two-stage treatment system, two individual totally different processes are used which do not complement each other but rather are at opposite ends of the biological chain.

Anaerobic digestion takes place where organic matter is allowed to putrefy through acid fermentation in a septic tank. This process takes several months as compared to the aerobic process, which takes several hours. The septic process develops sulphur compounds, which is food for sulphur seeking microorganisms. This process also produces odorous smells when the effluent is discharged.

The smells are gases mainly hydrogen sulphide, methane and carbon dioxide, with dissolved sulphur compounds in the discharged effluent. Anaerobic bacteria are also very fragile and any inorganic compounds, i.e., soaps and household cleaners or disinfectants, discharged into their environment quickly upset them causing poor treatment performance. In addition, the excessive amounts of water reduce the contact of bacteria and the food waste causing starvation.

In a two stage treatment system the primary phase or septic process has no operating parameters and cannot be tuned to a particular loading situation but relies on the retention of solids by floatation and settling. The retained solids are converted to bacteria cells, which remains in the system as sediment or sludge, which will require frequent desludging. Anaerobic digestion of organic matter has no oxidising process to reduce the volume of sludge.

In a two stage treatment system periods of high sewage flows (hydraulic loading) can cause scouring of septic sludge or solids from the septic compartment. If this sludge waste escapes from the septic tank the organic loading on the aerobic section can be excessive causing poor treatment. In this type of system there is little that can be done about it except stagger or reduce the loads of water discharged from the laundry etc.

High sewage flows that are generated in a home and passing through a septic tank causes scouring and a carry over of solids, and as there is little or no buffer zone to absorb these shock loads, solids pass through to the secondary treatment compartments of the plant. All the compartments in this type of system are kept constantly full, and rely on an overflow of each compartment to transfer the liquid from tank to tank and compartment to compartment so scouring can happen quite easily during periods of shock loads.

During the Aerobic section of the two-process treatment system no Activated Sludge is formed as it does in an oxidising system, but rather a slime type growth, which takes place on a submerged media of baffles and tubes. When this slime growth becomes heavy it sloughs off (breaks away) from the submerged media and settles to the floor and as there is little to control this slime growth sediment, choking of the system often occurs causing loss of treatment. Any slime growth solids that settle in the settling compartment are supposed to be removed from the process and returned to the primary septic tank. This is difficult to achieve with inadequate designed tanks.